Who missed their bus because they are standing on the wrong side of the street? Me.

Who sets their fire alarm off at 6.30am (in an apartment building by the way, so guess who was EVERYONES favourite neighbour that morning) because they forgot to open their window? Me.

Who has absolutely no idea what airport they are flying out of to get home? You guessed it, ME! (But in my defence there are 4 – yes FOUR – so let’s hope I figure it out before I go home: I think it’s Avalon, but let’s be honest, I got no clue).

For the past 21 years of my life, I have lived in a town called Nowra, situated on the South Coast of NSW and has a population of 20,000 people. There is one bus that comes to my house and 9am and 3 pm each day and it’s a quiet and relaxed town with a reasonable small shopping vicinity. It is also a place where I can walk down the street and know at least 3 people on my way to the post office. Although Nowra has a bad rap for being a place with limited opportunity, homelessness and a reasonably low income per individual, Nowra has been my home since forever and you could say that I have become very comfortable with the local way of life.

So as you could imagine, my first solo trip to Melbourne has has been a very, VERY, overwhelming experience.

I am here completing a two-week marketing internship at Vegemite in Port Melbourne, which is so exciting! However I have thrown myself into the deep end because as soon as I got here I started working. I also had no idea how to get to work, and on the map it definitely looked alot closer than it is in reality. Turns out it takes me half an hour to get to work, and an hour to get home and to get home I need multiple transport options (bus + tram or bus + train) and when you have no idea what you are doing, the simple task of getting home is an exhausting challenge.

I don’t think I have ever been anywhere as loud as Melbs. As much as there is beautiful street art and the locals for the most part seem kind and helpful, the streets here are absolutely insane. To start with, there are three main types of public transport, those being trams, busses and the train. And trams are in the middle of the road, and are not very clear on where exactly they are going. Due to this, I tend to get on and hope for the best, however this hasn’t been the most effective strategy as I end up in some unexpected places most of the time.

Also, busses ARE UNRELIABLE! As much as they come often, some of them stop if there are not enough people on the bus, meaning that you need to find another way home. Of course this was a lil shock to the system, however as it is my 7th day in this crazily beautiful city, I am slowely learning to expect the unexpected and to go with the flow.

Although transport is a nightmare, this city is one that never sleeps and with Woolies and Melbourne CBD right across the road, those 9pm cheesecake cravings are satisfied in an instant. Not to mention the shopping experience in Melbourne is one of complete bliss. With stores like Princess Highway, KitKat (where you can customise your own chocolate – I’m living in a dream), Peter Alexander and Pancake Parlours, Nowra’s shopping experience is plain embarrasing. Melbournes CBD has 5 levels of  stores, that seem endless in length.

Further to this, my apartment is two minutes from Queen Victoria Market, where there are so many street food options deciding what to eat is a struggle. Read more about the market in future blog posts! 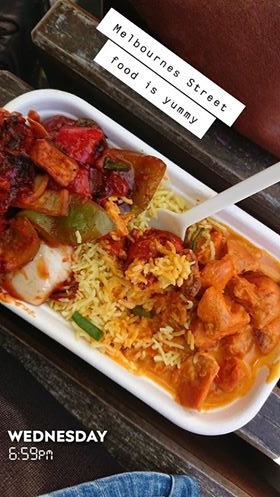 Melbourne is exciting and innovative, however homelessness in the city is abundant. One of the first things I saw when I hopped off the bus for the first time was two men lying on blankets out the front of Central Train Station. They were sharing a cigarette and each had a hat for coins lying beside them. They were a stark contrast to those wearing suits and carrying brief cases, bustling through the street ready to catch the tram. There are so many of these people lying about, asking for money to buy food. Yet there are also an insane amount of businesses here, surely someone is smart enough to solve the problem? I guess it depends on how these people found themselves to be homeless in the first place..

As much as I love Melbourne so far, I also miss home – both are so different but I can appreciate both for the good and bad quailites each posses. Keep an eye put for future blog posts about my placement and how ya girl is managing the city on her own!

Until then,
Caio bella x